Pamela Murphy read Geography at the University of Cambridge before working as a University administrator and then training as a primary teacher. She worked in a mainstream school as a class teacher before working in two special schools and she is currently the assistant head teacher of Queen Elizabeth II special school in London. Pupils at the school are aged between 4 – 19 years and have severe, profound and multiple learning difficulties as well as complex physical and medical needs. This is an extract from an interview with Pamela for A&E. 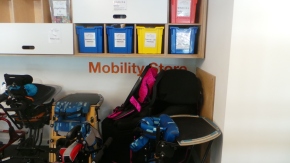 In my third and final year at the first special school where I worked, I had a class of children who were severely autistic with huge sensory needs. We were on the middle corridor and across from us was a big hall and doors that opened out onto it.  So in that middle corridor I had a group of children, all non-verbal, huge sensory issues, all with issues about transition from Year 6 and a classroom that was in no way suitable for these kids that opened directly onto a hall where anyone could be having a PE lesson.

How did you resolve the problems of the unsuitability of that space?

To go outside we used to have to go down two flights of stairs.  Transition from one place to another was difficult.  We spent two weeks trying to get one of the boys from that class to go into the art room for the first time and one time I pushed it too far and got a huge bite on my hand as a thank you.  And I knew it was my fault, I’d forced him into a space beyond where he wanted to go.

And there’s another thing that teachers are obsessed with. Cupboards! (laughs). I can understand it, but at the same time those classrooms weren’t huge, yet there’s one thing that they all had and that’s walk-in cupboards!  And they were just kind of dead space, full of stuff that people accumulated that they couldn’t use or couldn’t find or couldn’t get to.  A new head teacher has started since then and has taken all those walk-in cupboards out and opened out the classrooms because you don’t need this kind of dark space that the adults retreat into to check their text messages!

If you were to go back to teaching in a mainstream school and had pupils who were severely autistic in your classroom, how would you use that experience to design your classroom?

Knowing the confines and restrictions that you would have in most classes, it would be a case of giving those children a space inside the classroom they could go to but not a space they had to go to and ideally a space outside the classroom too.  There are a lot of resource implications alongside that, but it’s not going to be much help offering them a space in a corridor.

If you were planning a new special school and were briefing architects, what would you tell them about designing the school?

There needs to be a lot of thought about what our children can do. They’re often in wheelchairs. It’s not just that the floors should be level, but that display boards and entry systems are at the right height for them.  Some of our children go up to full adult height, some of them don’t, some are younger and smaller.  There’d be quite a lot of things about height to consider.  We’ve got a built in reception desk, for example, where people sign in and out and part of the desk is up here (indicates adult waist height) so there’s a lot of things that are at the wrong level for our wheelchair users.

A lot of our children who have more profound difficulties spend a lot of time on the floor looking at the ceiling. There was one meeting where there was a consultation around what kind of floor colour would we like and slightly odd things like that seemed a bit immaterial really and I remember one of the teachers asking about the lighting for the children with autism, flickering lights and things like that, and then the message came back from the architects for us to tell them what we wanted and (addresses architects) ‘No, because you’re the architects, we don’t really know about different lighting, we’re not the first special school to be built, we’re at the end of the BSF programme, you’ve done loads of other schools’ but there seemed to be a complete sort of … I wasn’t aware that they came and spent time in the school beforehand to see what the needs were.

You’ve talked about flexibility being a big issue in special schools.

What we’d like is a spare room to use for different things at different times.  We’ve got an art room, but if you set that up, you’ve got another class later on.  The hall is used for lunch and PE later on.  I’d create a space you could keep as a dedicated space like a theatre space or a role-play street for installations: an interactive space at you can use for different things, a space that doesn’t have to be anything else.  It could be whatever you decide you want it to be that term.

One of the new sixth form rooms is a common room which has got a sort of breakfast bar area with stools for students to sit on with the idea of the students being able to go in there and have some independence.  But then you might have a wheelchair user who is physically quite able and cognitively quite able but they can’t get around it.A snooker table was put in there too – one of those classic things – one year you may have students who are able to play snooker and then the next year it’s just something to climb on or lie on.  You do need a lot of flexibility with those spaces to meet those wildly different needs  For example, the art room has to be able to accommodate ten physically able kids who can get up and walk around, or five wheelchair users who might spend some of their time on the floor.  You need to be able to push things away and make space, so you really need double the space because you’re not sure how it’s going to be used at any one time.

The architects designed a family room. It was supposed to be an office for a family worker and also somewhere for parents to go and socialise.  But it’s only big enough for three people to have a cup of tea so as soon as there’s a bigger event they have to go to another space in the school.   So you need quite a number of spaces that can be flexible.

View all posts by Emma Dyer