For a book that says almost nothing about Education – no classrooms, no students or teachers, no school architecture – James C. Scott’s Seeing Like a State is one of the best I’ve read on school design, being in schools and education.

He takes a phrase, “high modernism”, and uses it as a way to understand the rise of scientific forestry in late 18th century Prussia and Saxony, the creation of surnames in the Philippines in 1849 by the ruling Spanish, the planning of Brasília between 1956-61, villagization schemes in 1970s Tanzania and many other cases: it comes to mean “the hubris of planners and specialists who believed that they alone knew how to organize a more satisfactory, rational, and productive life for their citizens.” (p.247) which involved planting, setting out, labelling, or ordering people and things in ways which made them more visible or legible to the state. A way of producing knowledge then that contrasts with the knowledge or practical wisdom that people develop on the ground.

In the case of Brasília, for example:

it was conceived of by Kubitschek [president of Brazil] and by Costa and Niemeyer as a city of the future, a city of development, a realizable utopia. It made no reference to the habits, traditions, and practices of Brazil’s past or of its great cities São Paulo, São Salvador, and Rio de Janeiro. As if to emphasize the point, Kubitschek called his own residence in Brasília the Dawn Palace. ‘What else will Brasília be,’ he asked, ‘if not the dawn of a new day for Brazil?’ (p.119)

And yet, “despite the attempts by urban planners toward designing and stabilizing the city, it escapes their grasp; it is always being reinvented and inflected by its inhabitants.” (p.143)

Certain aspects of this strain of high-modernism survive in the ways that politicians and planners think about school architecture. Earlier in the year I was given a whole bunch of documents from the council meetings of a large English city (dating from 2007-8). One in particular regards how they should design the 7 or so schools they had been promised the funding for, a Design Brief presentation, it is structured in bullet points, the very first is:

The confidence with which architecture can be employed to produce certain kinds of identified, predictable change is resilient and, for me, recalls the cases in Scott’s book. Causality sits simply and straightforwardly in the space between architectural structure and “outputs” of human activity: people are deleted, culture is deleted, curriculum disappears, history doesn’t exist. There’s no evidence of an understanding that the systems humans are in, and that they transform, are open, inevitably complex, ones. Things are delivered and architecture is the way to deliver.

So much more interesting then to think of an architecture (and political understanding and use of architecture) that knows its limits, that doesn’t just leave space for people to make their own space but tries to find ways to make those spaces for people to then go and do things with, to inflect, to make their own. Hertzberger springs to mind but there are many more. On the educational side, Jane McGregor’s writing on socially produced school spaces are inspirational eg 2003.

Not everyone appreciates theory or ideas in the abstract that I’ve written about here and I understand why – theory can seem entirely unconnected to how people live out space. But in a way, theory is intensely practical since it’s at a theoretical, ideological level that single ideas are given legs and walk. And at that level we need to find some way of getting people back into architecture – at a level of design, in policy meetings, into the thinking of so many consultancies that have sprung up to feed off the Academies programme in England, in spaces where the people who’ve been given £200 million or whatever to spend on a new set of school buildings can be challenged (and/or supported).

Anyway, happy holidays if they’re still happening, and hope they were good if they’ve been and gone. I’ll be presenting a (more polite and less ranty) paper on this at the British Educational Research Association conference in Belfast in 10 days or so. More later on that maybe. In the meantime, an image to show that (outside of England) summer can happen. It is showy-offy, I wanted one with cats but they wouldn’t comply: 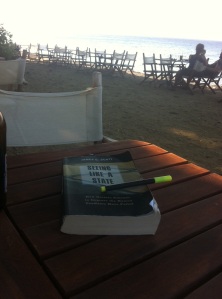